On July 7, just days before the 2016 Youth National Sport and Speed Climbing Competition, Ashima Shiraishi, 15, took a 45-foot ground fall at Stone Summit Climbing Gym in Kennesaw, Georgia. The competition will be held at Stone Summit next week, from July 14-July 17. Ashima’s father, Hisatoshi, was belaying her when the incident took place.  After spending several hours in the emergency room, she was released, sustaining back bruises but no critical injuries.

Hisatoshi plays a huge role in Ashima’s climbing career.  According to an interview with Rock and Ice, Ashima’s agent, Jonathan Retseck, said Hisatoshi belays his daughter “hundreds of days out of the year.”  Retseck explained that Ashima’s father was using a GriGri2 when he accidentally gripped down on the brake release lever, causing the fall.

Not long after the checking into the hospital, Ashima was walking around, evidently sore but in good spirits. “She will go back to the gym tomorrow and see how she feels,” Retseck told Rock and Ice on July 8, 2016.

Good luck, next week, Ashima!  EVO Rock + Fitness is wishing you a speedy recovery.  You’re a badass, and we are impressed. 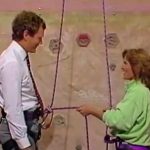