EVO Rock + Fitness staff Chris K. and Sean W. ventured off recently to hike and climb a route on Mt. Katahdin, The Armadillo. After an exhausting adventure, they were kind enough to share their story.

So, what inspired you to climb this route?

Sean: Chris inspired me to climb this route. We had been planning for a long time to climb Mt. Katahdin, but every attempt was thwarted by weather. Eventually a window of good weather opened up and we made plans to hike and climb Mt. Katahdin. Originally, I thought we were just going to do the Knife Edge hike, but it turned out that Chris had other plans in mind.

Chris: Sean had originally wanted to hike Mt. Katahdin and that wasn’t enough for me. I heard about this route 2 years ago and every time I went for the attempt, weather, and partners kept falling through. So this route has been on my mind for awhile. I asked Sean if he wanted to do the route and he was game.

Tell me about your trip? Lets start with the hike in.

Sean: We drove in and got to the rangers gate at 5:45am. The gates opened at 6am. Chris had already made a reservation, because you need one in order to park. But it turned out that the online reservation wasn’t working properly on their end, and our names weren’t on the reservation. We had to wait and hope for the rangers to find an open parking spot for us. We eventually got a parking spot at 7am.

Chris: Ya, that was a bit stressful. I had a good feeling that it would work out though.

Sean: Once we got in, we headed down the road to Chimney Pond to check in at a second ranger station. We ended up talking to someone about the route and they mentioned that most people don’t do The Armadillo because of the rough approach, there is no marked trail. We got some vague directions on where to turn off on a dry river bed but the trail was overgrown and we had to bushwhack through the riverbed. We missed the turn off and had to turn back on the riverbed. It was complicated to say the least.

Chris: There was definitely a lot of route finding. We were in a thicket of bushes and couldn’t see much. Every now and then we would have to hike out to find a reference point and then re-adjust our direction.

Sean: We eventually found the turn off and hiked up to a little waterfall. We grabbed a bite and took a rest before continuing on. The hard part of this whole thing was that we knew where we wanted to go, but couldn’t figure out how to get there efficiently. We started to head towards the slabs which involved scrabbling on the rock and trees. The slabs also started to get a bit exposed so we decided to rope up for the last part of the scramble. A lot of the scrambling, you don’t want to slip. If you fell, it would be a long fall.

Chris: I felt good physically, but mentally I was having a bit of trouble. There were moments during the slabs that we were hiking on loose rock and there was a potential for falling.

Okay, so you finally got to the base of the route, The Armadillo. Can you tell us about the route?

Sean: We finally got the base of the route after all that scrambling and bushwhacking, ha. For the actual climbing, there are 6 pitches. The first pitch is a 5.5 chimney, second pitch is a 5.7 face climb, the third pitch is 5.7 crack climb where you need a #4 BD cam, the 4th pitch is a 5.5 scramble climb, and the last two pitches are more scrambling with climbing interspersed throughout.

What was your favorite pitch on the route?

Sean: Definitely the second pitch, it’s exposed and has great climbing. There is a chimney flake that you come out of and get onto the face. The flake sounds hallow and was scary to trust. When you get on the face, the ground just drops below you. It feels like your 600 feet in the air. I had to do some balance moves above my protection. Once through that, there is an old piton that you clip and then you traverse out to a flake.

Chris: The 2nd and 3rd pitch were really exposed. Stepping onto the flake was an exciting feeling. Sean lead those, and if I could go back, I would lead them. It was so fun.

So you finally reached the top, how was that?

Sean: When we got to the top, we ended up being 10 minutes from Baxter Peak. Because of the time, we decided not to hike to Baxter Peak and instead head towards the Knife Edge since I have never hiked it before. It’s funny that after climbing The Armadillo, the Knife Edge hike seemed like a cakewalk. We headed down the Helon Taylor trail, which was tiring. When we finally got into the tree line, it was dark. We eventually made it to the car and started to drive back home.

Chris: It was great reaching the top. There was one other party out on Baxter Peak. Since we were running out of time, we did not go to Baxter Peak, instead we hiked down what felt like a never ending staircase. Sean forgot his headlamp, so we needed to get out of the tree line before it got too dark.

This is where your climbing adventure turned into a complicated drive out. What happened?

Sean: Well, we started to drive down the road and noticed that our car was making funny noises. Turns out that we had a flat tire. We tried to get the tire off but it would not budge. We decided to split up, I would stay with the car and Chris would hike back to the Ranger Station. By this time it was 10 pm. The Ranger Station was closed and no one was around.

Chris: Ya, the lug nuts were fuzed to the tire so we couldn’t get it off.

Sean: We ended up having to sleep in the car in the middle of the road and needed to wait till the morning to get a Ranger. There was also no cell service.

Chris: I ended up sleeping, well not really sleeping outside.

So, what happened?  Did you see any aliens or scary creatures in the woods?

Sean: No, we ended up getting woken up by a Ranger that was probably not too excited to be helping us at 5:30 am. We eventually called a tow truck. We were told that AAA would be there in an hour, turns out it was 3 hours later…that was fun. We finally were able to get the tire off and get a spare on. We headed out of the park and tried to find a shop that had a tire to replace the spare. Well turns out that the first shop doesn’t have the tire we need, and the second shop was short staffed. We had to wait till their staff came back from lunch. Finally we got the tire fixed and headed back home.

Wow, so your trip ended up being quite an adventure. Would you describe the experience as Type 2 fun, where you dislike the process but now looking back are glad you did it?

Sean: Ha, well some of the hiking and the entire route, The Armadillo would definitely be described as Type 1 fun, that was awesome. But some of the approach was tough and the drive out was not fun.

Chris: It was all Type 1 fun. I loved the entire process and adventure of it all.

What would you suggest to the next group that wants to attempt the climb?

Sean: I hope someone can get a picture from above looking down in order to see the trail that groups need to use in order to start the approach. That would help people a lot. I would also suggest knowing your climbing partner well. Have a positive attitude and be ready to have your plans change at a moments notice.

Chris: I would suggest not taking the Helon Taylor trail. If you’ve hiked the Knife’s edge already, don’t bother. I would also suggest taking the time to look around at the beauty and the exposure of the place. Finding the right partner is key as well.

Location: The Armadillo starts in the middle of the south basin, directly south from Chimney pond.

For more information, check out Mountain Project or ask Sean and Chris K. 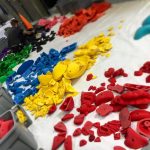 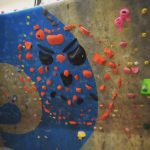